I love making a good flaky pie crust. Delicate, melt in your mouth, fragile pie crust is the best. None of that thick dry pie crust hits my pie pan. I learned the art of making pie crust at six years old. One of the best things my mom ever did is start us cooking and baking at a young age. Even then I loved it. We couldn’t use the stove but we could mix it up. My independent self thought I should be able to use the stove but mom knows best. We had an old ceramic gas stove. The kind you had to light with a match and had “tv dinner” trays that slid out on either side. Pretty cool to a 6 year old and scary for a mom. 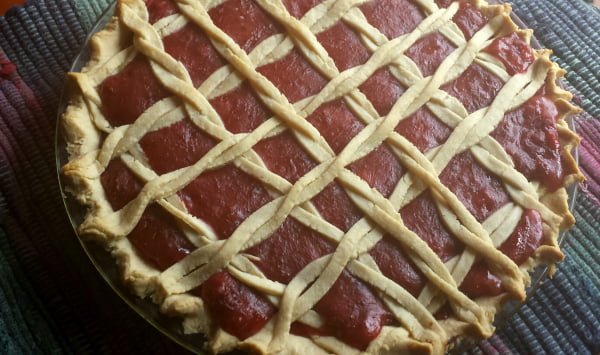 I still have the recipe for making pie crust, re-written from my mom’s old recipe but there is nothing better than pulling out her grease stained, faded recipe even though I don’t use it anymore. You see, I made it so many times I learned the feel of the crust between my fingers, the squish it makes when it’s just right. I also adapted this simple pie crust recipe to ingredients I use, and wrote it out just for you.

That’s the beauty of it because when it’s hot and humid or gray and cloudy, the pie crust turns out different. My favorite pie baking day is one that is overcast and gray. For some reason the crust just turns out perfect.

I start with a mound of flour – soft as white winter wheat or stone ground whole wheat depending on my mood. The stone ground whole wheat isn’t quite as flaky but it offers a hearty and still delicate crust if you pull it together just right. Then I add a pinch of kosher salt, and blend in the butter or coconut oil with my hands until it’s a nice crumbly mass. Again, I just know WHEN. Mom’s recipe calls for shortening but I left that product behind about 1.5 years ago and haven’t missed it much.

Once your mixture is a fine crumble that sticks together a bit when you pinch it between your fingers, you dash a bit of nice cold water over it – a few tablespoons does the trick but it has to be cold. I don’t know why. It just never turns out so well if it isn’t. Mix the water in with your hands or this awesome OXO dough blender

I just met and fell in love with, until it forms a nice ball of dough when pressed together. Don’t over mix. It turns the crust tough and there is nothing worse than a tough crusted pie.

Flour a nice large surface, flour your rolling pin, and roll that crust out nice and thin, I usually like it to be around 1/8 inch. As you start rolling, move the small round a few times. I will often flip it until it gets too big to manage, making sure to sprinkle a little more flour on the surface as need be so it doesn’t stick. You could also use a Silicon Baking Mat

to make it easier.

Smooth the crust over the pie dish and fill with your choice of filling if you are cooking it with the filling. Otherwise, cut the excess dough off and crimp the edges. Then bake the pie crust at 375 for 10-15 minutes until it is just baked. My mom use to put spoons in the bottom of the crust to keep it from getting air bubbles between the crust and pan, which creates a bumpy surface and cause the crust to break when filled. You can also buy ceramic pie weights

Things to remember when you make a pie crust

Products to have when making pie crust

**Disclaimer: Real: The Kitchen and Beyond is a participant in the Amazon Services LLC Associates Program, an affiliate advertising program designed to provide a means for sites to earn advertising fees by advertising and linking to Amazon.com.