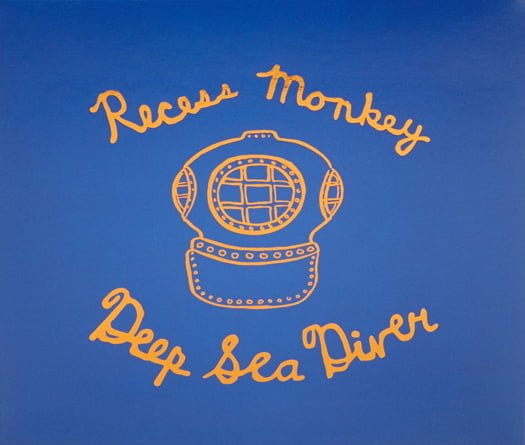 We love Recess Monkey. The last CD we reviewed by them, In Tents,  is still a favorite in our household so when we were asked if we wanted to review Deep Sea Diver I said yes in a heartbeat. Their newest hit didn’t disappoint. Even our eye rolling 7 year old likes this CD and my 5 year old ballerina found a few new dance moves.

Deep Sea Diver explores the under water world of the ocean. At just 5 years young, our captain takes us below the ocean’s surface in our “Tambourine Submarine“. Setting the beat to the propeller’s rhythm, we listen to the undersea musician they call “Fish Sticks” and sympathize with the pain of being called “Shrimp“.

Deep Sea Diver goes from fun and quirky play time with “Beach Ball” to dealing with real life issues in “Stranded“. Weaving messages about real life kid issues into the fun and light CD is a great way for kids to “get the message” in a way that feels comforting, safe and normal.  Even with all these different topics, Recess Monkey does a phenomenal  job at keeping the CD playing on its deep sea theme.

E9: It was fun. I liked it. The music was very energetic.

Check out the newly released music video for “Fish Sticks”.

We also were lucky enough to have the chance to interview Jack Forman and here are the questions the kids had for him.

E9: How do you think of what songs to write?

Jack: That’s a really good question! The first thing we do is talk about what we want our albums to be about- for the last several, there’s been a big theme that we’ve used to tie them all together. Once we have a big idea that we’re excited about, we start thinking about the idea from lots of different perspectives- what it might mean to a kid, to a family, what’s funny about it, what we remember about it from our own childhoods, and key words that we want to use in songs. We make a list of hundreds of ideas! Then, we go off, guitars, ukuleles and kazoos in hand, and start making music. Sometimes a song idea just appears on its own, other times it takes a lot of thinking. My favorite thing is sharing a song for the first time- once the rest of the band hears it, it belongs to all of us!

E9: Is it hard work making all the sounds for the songs?

Jack: The hardest thing was holding our breaths long enough to record the sound of the submarine underwater! We really like playing around with sounds- it’s interesting how much they can make you feel like you’re in a new world! We try to use them sparingly, to create a world, but not let them take over the songs. The songs are the whole point, after all.

K7: Are the little voices in the Choral Reef meant to be shrimp?

Jack: That song is a pun – we imagined that it’s about a coral reef that sings choral music. Coral reefs are really awesome living sculptures – they’re actually made of millions of little creatures who build condos on top of each other, kind of like an underwater apartment! We like to imagine that the whole family of little coral critters are all singing together in a microscopic little choir!

K7: Where do you get your ideas for songs?

Jack: It’s really a mixture of things we hear from the kids that we teach and our own kids, things that we think are really funny, and things we remember from when we were kids. It’s been a while, but we all remember our childhoods vividly!

R5: What instrument is your favorite?

Jack: I play the bass guitar, which I really love and am still learning how to play better and better everyday! Probably my favorite instrument is a synthesizer. I have this great old keyboard called a MOOG, maybe 30 years old, that makes a lot of really cool sounds!

R5: Which song is your favorite?
Jack: This is another great, and extremely hard question!!! It changes all of the time, but right now, I really love the song “Shrimp” from the album. It’s really playful and fun, and was a blast to record! We have a video for it which we’ll be releasing in the next few weeks- it’s by far my favorite video that we’ve ever made!