It’s frosting. It’s a dip. It’s a topping. It’s confused but it’s Pumpkin Brie Topping whatever else it may or may not be, and it is made from this easy pumpkin puree. I needed dessert in a hurry the other evening. Like, I forgot I had a party to go to in 2 hours, hadn’t had a shower yet, and signed up to take a dessert kind of hurry. I fell back on One Bowl Brownies. Google it until I post about it but don’t be fooled by “Kraft”. It’s from scratch and so easy that almost any one could make them…as long as you aren’t the type who burns boiling water or blows up food in the microwave. To spice it up I used the partiers as my guinea pigs. That’s just the way I roll.

The Event: A Fall Garden Party

The Dessert: Moist rich bites of chocolatey heaven
topped with a finishing touch of
amazing pumpkin, brie, spice, and a helping of sugar

People, it was pumpkin pie on a brownie but so much easier than mix the pumpkin, the eggs, the spices, and pop it in a crust to bubble and bake and just pray it sets. 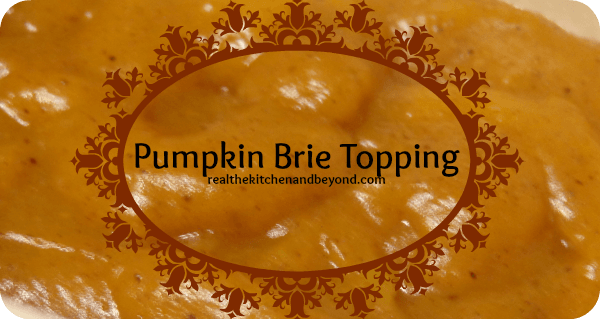 The Making of Pumpkin Brie Topping

That was so darn hard that I deserve every bit of WOW I get. Now let me go make some more – just for you of course.

Go on and take a taste through the screen. You know you want to.

What would I use Pumpkin Brie Topping for?

« Eggless Brownie Flop
A Frugal Round Up »

Leave a Reply to Get The Most Out of Your Pumpkin: Pumpkin Recipe Round Up! | Faith In Every Day Cancel reply