You don’t need a holiday or an ice cream maker for this no-churn ice cream recipe. Mexican Chocolate Ice Cream is so rich and creamy you won’t believe how easy it is to whip up for your next party. I am feeling summer party ready with this homemade ice cream recipe and you should to because your friends will LOVE it. 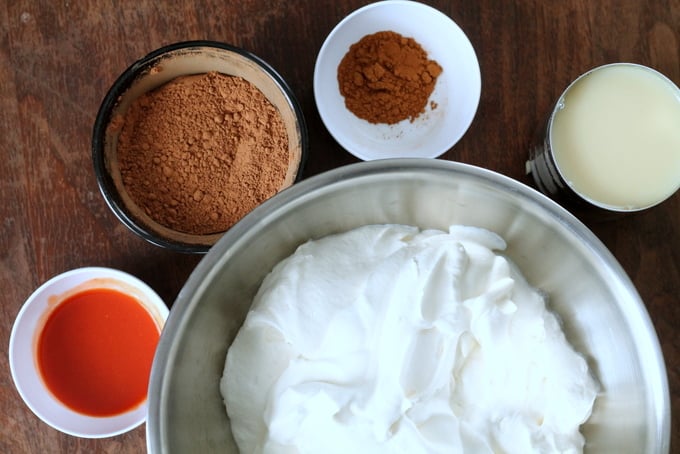 I love chocolate ice cream but wanted to push the traditional chocolate limits a bit and create a wow-worthy summer dessert that doesn’t take a lot of extra effort. I decided to blend my favorite hot chocolate flavors into ice cream (with a secret ingredient) and see what would happen.

My secret to the best hot chocolate is to start with good semi sweet o German chocolate, blend in a little bit of cinnamon, vanilla, and garlic-free chili powder after it’s melted, then whisk in milk slowly, tempering the chocolate, and heat to the desired temperature. Topped with marshmallows or homemade whipped cream, it’s my favorite winter evening treat. How could these flavors go wrong in ice cream? We’ve tested them extensively. They can’t.

I started with a basic no-churn ice cream base then mixed in quality cocoa powder, vanilla, cinnamon, and an ingredient so super secret that I debated whether I even wanted to share it with you.

The secret ingredient is key.

Seriously, this ice cream is so ridiculously delicious I was worried the secret ingredient would change everything and you wouldn’t give it a try, so you have to promise me you’ll give it a scoop before making a judgment call.  The results are so tasty I had one recipe tester ask for the recipe and jokingly offer to sign an NDA when I said it wasn’t quite public yet.

The secret ingredient is Frank’s RedHot Original. Can you use a different hot sauce? Perhaps, but I’ve tested it with this one and cannot attest to results from another brand. Hold up a minute before you leave. The hot sauce is subtle enough that it adds a nice afternote without smacking you in the face. It takes chocolate ice cream from a one note experience to a flavor adventure. First you taste that rich creamy sweet chocolate, then it’s carried on with notes of cinnamon and finished with a heat that lingers for just a hint.

Rich creamy chocolate ice cream with hints of vanilla and cinnamon, and finished with just a touch of spicy heat.

What’s your favorite ice cream flavor? Dish in the comments!