This camping road trip was one of the best vacations we have been on in a long time. One of my favorite finds was Four Springs Farm, and this roasted poblano corn soup was a fantastic breakfast.

One of my favorite finds in preparing for this road trip was Four Springs Farm Campground. I was so excited when I read up on it – a working farm with several campsites, homeschool programs, fresh baked goods, and fresh organic produce, it doesn’t take much to know this is my kind of place.

Since we were planning to make a few stops along the way to Ben and Jerry’s, I thought we should camp up that way. It was a long day and I knew that we didn’t want to get to a campsite too late – aka after dark. You never know what a site will be like and setting up in the dark leaves a little something to be desired.

As we were driving, I discovered we would pass by the campsite on our way to the Ben and Jerry’s Factory so we decided to stop in and set up camp. We met Jinny, who was a fabulous hostess, and chose our site.

The campsites are set back a little from where you park so you can’t get electricity to them but if you are a little less adventurous you can also book the cabin, which has bunks.

The tent sites are set up quite nicely and are neatly mowed. Each one has a wooden platform you can pitch your tent on, a picnic table, and a fire pit. The trails leading to the sites are easy to walk and are well cared for, with pretty seasonal wildflowers doting the fields round you.

Jinny supplies wood in a shed a little farther down the drive, which is a nice amenity as some require you pay extra for it. You cannot bring your own firewood to any campsite in Vermont as there is concern about transmitting insects that could destroy their forests, which makes complete sense to me. Only one state we stayed in doesn’t have that requirement and I thought they should have.

One of the things that makes Jinny such a great hostess is that she thinks of the little details. As I said, the campsites were clean and well cared for. She also has a wash house with 2 toilets and 2 shower rooms. Both have electricity, so if you absolutely need that hair dryer on the trip, you can make sure it is properly cared for and neither are coin operated (YAY!).

There are steps on one side of the wash house and a ramp on the other, with one bathroom and shower room a little larger than the other and handicap accessible. I love this as it is something many small campgrounds don’t seem well equipped for.

There is also a pavilion with a kitchen sink (hot water included), a fire pit, and several picnic tables. I don’t think there is anything she hasn’t thought of to make for a great camping experience and I cannot wait to go back.

In all honesty, the only reason we didn’t just stay there for the evening is because the kids really had their hearts set on Ben and Jerry’s Factory Tour. I  would have preferred to explore the farm a bit more and relax in the peaceful surroundings.

Since we got back from the Ben and Jerry’s Factory Tour so late, we ate cereal for breakfast and went straight to bed. My heart had been set on a fire roasted poblano and corn soup though so I informed everyone that since we were getting back so late they would be eating it for breakfast. After all, it’s camping and anything goes when you camp as long as you get a good meal. 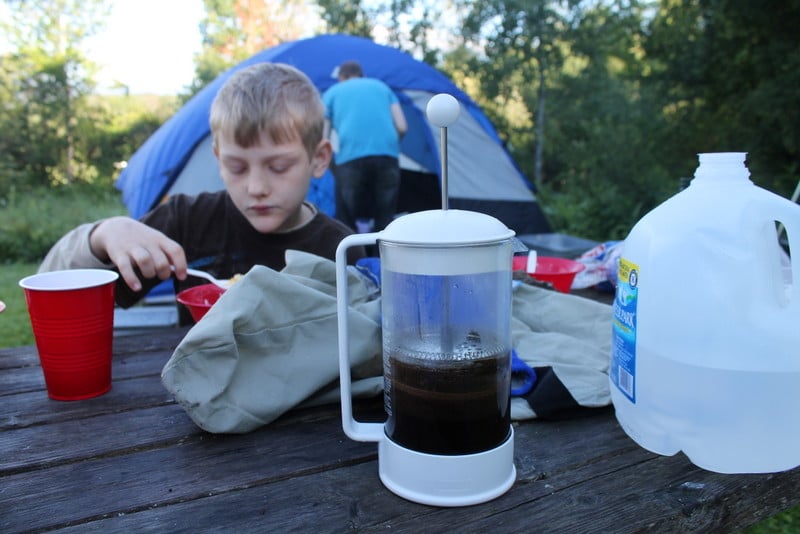 Morning came around and after much effort, we got the campfire going. Note: my husband was never a Boy Scout and neither of us are master fire builders. But get it going we did and I started the cooking process.

I enjoy food prep inside or outside but prepping with the sun shining down and birds singing around you is especially relaxing. While I chopped onions and garlic, I had the boys roast the poblanos over the fire.

Once they were roasted I put the pot over the flames with onions, garlic, and poblano, sautéeing them until the onions were soft. Then I added the corn and promptly knocked the pot off balance, sending it to the ground.  I cried and picked up what was on top of the pile and then added more ingredients to get the amount as close to what I originally had. 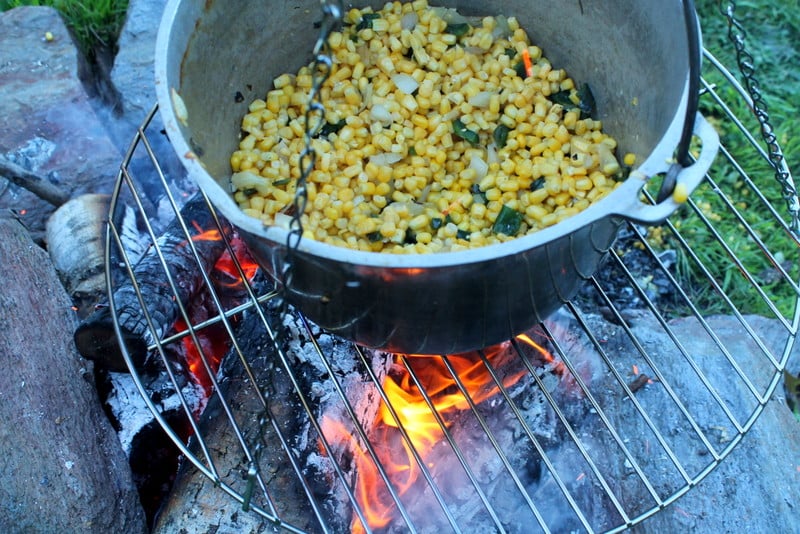 I added the milk and some sour cream and heated the mixture through until it was bubbling around the edges. Next time I will add the sour cream after I pull it off the flames and just stir it in. Once the soup was set aside, I made one large pancake and cut it into pieces, putting a piece in the bottom of each bowl. Then I poured the corn soup over it.

Corn soup was just what we needed after a cool night. It was filling and warm and the pancake made it a more breakfasty dish. The pancake idea credit goes to my boys who both suggested we serve it over pancakes like a corn gravy. They nailed it! This is definitely going onto our list of popular meals. 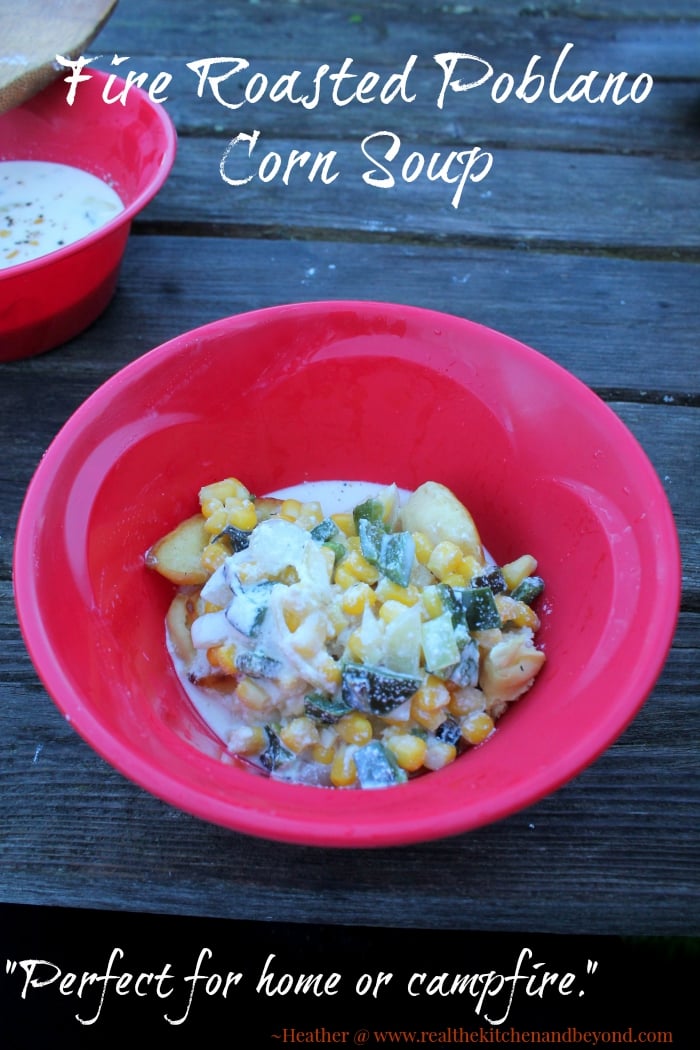