I was introduced to Fly School Circus Arts in April when I was approached about taking a trapeze lesson. Poor guy. I literally laughed in his face. (He can attest to that.) ME? You know, the girl who suffered a panic attack two seats behind you for 45 minutes at the Carrie Underwood concert from being so high in the stadium? You are asking ME? I thought about it for two days and you can read about my experience and why I said yes here.

As parents we are our children’s most important teachers. We can’t just “talk it” but have to actually walk it out.  I took this opportunity to “walk it out”.  It wasn’t easy but 6 months ago I faced my extreme fear of heights, conquered them and taught my kids a valuable lesson.  Now, 6 months later, as Fly School Circus Arts is celebrating the Grand Opening of their permanent location in Philadelphia, PA, we had the opportunity to once again be part of the adventure.

This time, instead of me flying, even though I would have loved to, my boys flew. I was asked before hand if I was nervous about them doing it. Without hesitation I said “Not one bit”. When I climbed that ladder the first time my boys thought I was crazy. There was no way they would try it. This time they were anxiously awaiting their turn and I was able to be excited with them because I knew Mary Kelly Rayel and her staff would practice every precaution – my boys were in safe hands.

Mary Kelly and her staff were patient with my boys, explaining what they needed to do to be safe,  correcting them where they needed to, and helping them feel comfortable. My boys aren’t generally very trusting so I was slightly concerned that they would struggle but with very little hesitation they followed direction and did amazingly.

One managed to hang from the bar by his knees and the other did some strange turn around in the air that left every one confused. I am pretty sure he let go with one hand and grabbed on again because somehow he ended up hanging from the bar backward. He can’t stop talking about “his amazing trick” that wasn’t really a trick. He was so excited about it I couldn’t really burst his bubble although I did explain it wasn’t really a trick other people do.

Fly School Circus Arts has just a few more weeks until they wrap up for the season so make sure you get there before they close for the season. From kid to adult, anyone from 6 years to 250 pounds can try their hand at flying.  Even if you are scared petrified of heights give it a try and see what new worlds await for you. Maybe skydiving? Maybe bungee jumping? Or maybe not. Either way, the feeling of accomplishment when you face a new thrill or work through your fear will leave you triumphant. Take it from me, it’s freeing. 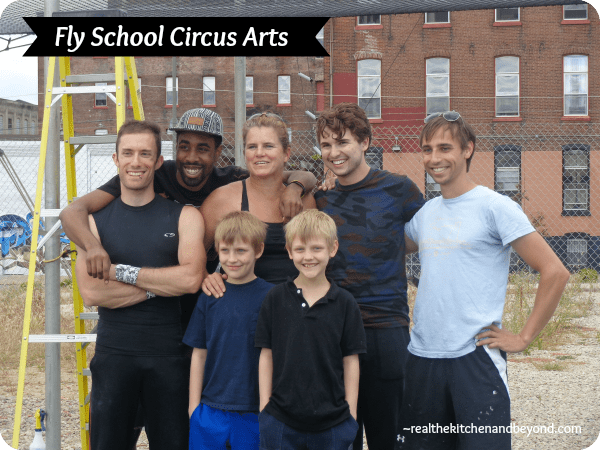