At this point you might already think I’ve “got lost”. Say what? Craters of the moon in Idaho? Let’s be real. I thought so too.

But let’s rewind just a bit. One of the fantastic things about taking a family road trip instead of hopping on a flight is that you get to see all the wonderful land you’d otherwise fly right over. This history geek…freak…nerd…whatever you want to label me, grew up reading tales of wagon trains venturing west, the Gold Rush, and the Westward Expansion in general and I was psyched, but that’s (mostly) a story for another day.

The one thing I want to unpack from my brain is envisioning our approach to Craters of the Moon National Park with the stories of travel weary pioneers approaching the area in wagon trains in mind.

Try to imagine the many miles people traveled as they raced winter only to get to prairie that had erupted (from what we now know as the Great Rift) into strange lava formations and cinder fields with very little water to be found.

Clearly I didn’t fully research this leg of the trip – heading east across the southern part of Idaho. However, in my defense I originally had an extensive list of things to do in southern Idaho.

Things we nixed at the last minute because we were in the area ahead of schedule and decided we weren’t interested enough in going to them to spend money on them or kill time until those places opened. (Always make your itinerary flexible enough to change your mind.)

About Craters of the Moon National

Craters of the Moon National Monument and Preserve is a national park that has preserved visible record of volcanic activity in a way you aren’t going to see just anywhere. It’s like being in another world….yeah, kinda like going to the moon.

As with the other national parks, your kids can take part in the Junior Ranger Program, or shall we say, Lunar Ranger program in this case. If you haven’t discovered the Junior ranger Program you are missing out! It’s a great FREE fun way for kids to learn more about our National Parks. 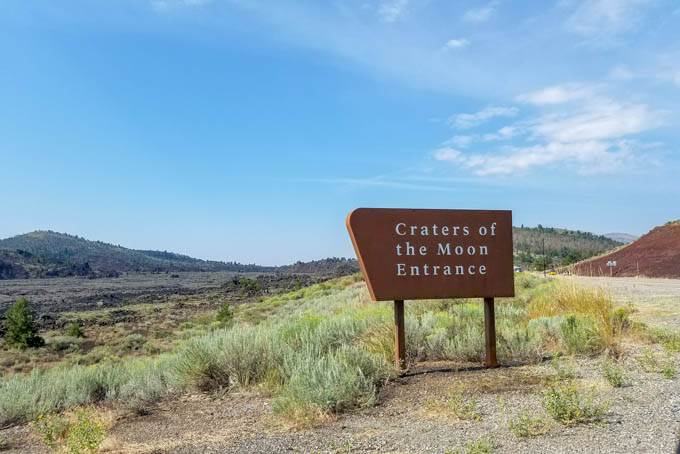 Your first stop at Craters of the Moon should be the visitor’s center where you can take a bathroom break, fill water bottles (love the water bottle filling stations at our national parks!), visit the exhibits, and pick up a map to drive through the park. There is a fee to enter the park, but if you are active military, have the National Parks Pass (or 4th grader pass!) you enter for free – more on that below.

Once inside the park there are quite a few places you can park and hike with a variety of difficulty levels and trail lengths, including 5 caves and several cinder cones (we hiked Inferno Cone. Be prepared to think you got to the top and see another stretch of steep trail. It’s totally worth it for the view at the top).

Throughout these trails there are signs telling you about that specific area and formations. It’s a fantastic educational experience. It’s incredibly important to stay on the trails so you don’t destroy the fragile environment of the lava fields.

Fees for Craters of the Moon National Park

Along with the $20 entrance fee to the park (if you enter by car), you will need a permit if you are interested in going backcountry and if you want to explore the caves. If you love visiting National Parks like our family does, I recommend buying an annual parks pass. If you have a 4th grader, make sure you visit Every Kid in a Park and get your free annual pass. You can find more information on the caving and backcountry fees here.

Lodging at Craters of the Moon National Park

Packing a tent, hauling a camper, or RVing it? There is a 42-site campground in the park that is first come, first served with limited RV spots and a group campground close to the park that is tent camping only for groups of 30 or less people. Otherwise, the closest campground or hotel is approximately 18 miles away in Arco, Idaho.

Have you ever been to Craters of the Moon in Idaho? Let us know your favorite stop in the park.